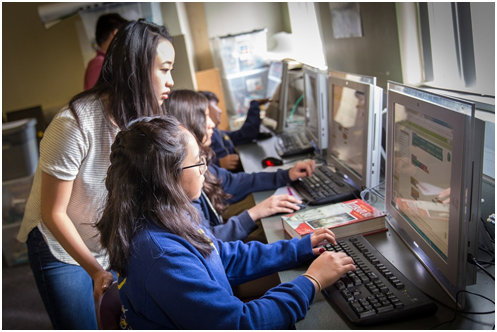 In our day-to-day life, you use computing technology constantly to communicate with other people, or to get information about the world around you. The internet connects a vast number of computers together, and forms a big part of our lives. Many tools for communication are provided by companies that provide ‘cloud’ services. They let us access their computer systems from different places and on different devices.

Companies also create software for smart phones which allows us to do things like send messages and post status updates on social media websites such as Snapchat, Facebook, Instagram and Twitter. In addition to these services provided by private companies, many governments have created publically available free or paid services for their citizens. Examples include the UK Government Digital Service and the United States federal ‘USA.gov’ website.

How these technologies work?

Anybody who uses Facebook on a computer or on their smart phone is aware that they are uploading information to a server somewhere in order for it to be shared with others, uploading an updated status on Facebook does not magically make it appear on other people’s walls “without anything happening”. We may sometimes take this infrastructure for granted, but there are very complex pieces of technology involved in providing these services. There are also techniques involved in analyzing the huge amounts of feedback provided by users to improve the services, for example in understanding which status updates about which topics are most engaging.

Computing technology can be seen as an art form in its own right, with people spending years learning how to program computers creatively and expressively through programming languages that allow them to perform tasks directly or generate content automatically. Just like reading or writing, computational thinking is a skill that anyone can learn, whether you’re using Facebook on your smart phone, surfing the web on your laptop, using Wolfram Alpha on your desktop computer, or coding up your own project on one of many platforms online.

Computational thinking requires creativity, problem solving skills, an understanding of different programming paradigms, and fluency in an applied mathematics that some find daunting at first. However, it can be as creative as you want to make it some people generate abstract art with code, some build their own games from scratch, some use mathematical models of diseases to develop new drugs , and a very large number of people work with data on a daily basis to inform business decisions or measure success rates for projects .

Computing technology is useful and fun

This relates to the previous two points: there are many ways that we can learn about computers, understand how they work and program them ourselves to make things , whether those things be art, games, music, literature or something else entirely . Even if you don’t want to become a programmer yourself, learning even a little bit will make you more aware of the impact computing has on your life and it’s also incredibly fun.

Read More: How To Make Terracotta In Minecraft? A Step-by-Step Guide

There are so many different people doing so many different creative projects with code these days. You can do it at school or college all around the world for free using popular tools such as Scratch, Codecademy, Alice, JavaScript and Python. There are also a huge number of online tools available for you to start programming today, including Codecademy, Code School, Think Java and many more. Some people go from never having programmed anything before to building their own applications within a week. It’s an incredibly useful tool that everyone can learn how to use, be creative with and have fun with.

Computing technology has benefits for society as a whole

A large part of this comes from embedded systems specialized computer chips that are built into an object by the manufacturer and can be accessed with relative ease by anyone who wants to reprogram them. This means that people are able to build new applications that interact with these chips on their own without having to purchase expensive equipment or become an expert at hardware engineering. Not only can you learn about advanced programming techniques using online tools, but you’ll also have the opportunity to create your own products, interact with the world in new ways (such as designing your own wearable computer) and design new products that could benefit society.

Computing technology can be used to solve real world problems

There are many examples of how computing technology is being used to solve issues in our society these include:

The possibilities are almost endless. There is much interest in the use of technology to improve quality of life and solve social problems, particularly it seems from young people who see a huge potential for this kind of technology.

How computing technology can be used to create games?

Some of the most popular examples from major companies, all have developed their own consoles which have become hugely popular with both gamers and non-gamers alike since their release during the 1990s. In recent years there has been a rise in independent developers creating games outside big corporations, using relatively inexpensive devices such as Raspberry Pi computers or tablets running tools like Scratch. Cloud gaming enables you to play on remote servers rather than your local machine, with no need for a console or even a TV, just install the game and you are good to go.

Where there are advantages of computing technology, there are also some disadvantages. Some of them are given below:

Computing technology is bad for our health

Technology is all around us these days, in the form of computers, tablets, phones and TVs used in our homes, workplaces and schools. This means that there are many opportunities for people to sit down in front of screens for long periods of time. A study by the University of Gothenburg found that when you spend too much energy sitting in front of a screen, no matter if it’s your laptop or TV set you’re more likely to have high cholesterol, overweight or suffer from depression due to social isolation. Another problem is eye strain caused by continuous exposure to bright lights like those on digital devices which can lead to sleep problems (such as insomnia) and headaches.

Computing technology is bad for the environment

Many people use computing technology in order to write documents, share photos and publish videos. This information is usually saved on either local devices or in the cloud so it can be accessed from anywhere with an internet connection. The problem comes from how much energy we need to power all those computers and other digital devices, it takes a lot of electricity to maintain a stable flow of data around the world at any time of day or night. In 2010 alone, electronic waste was responsible for 41 million tons of CO2 emissions globally, according to a study by United Nations University. On top of that, mining all those components requires huge amounts of resources such as aluminum, gold and silicon which are then released into the environment during the manufacturing process.

Computing has become so advanced that it is now used for military purposes such as drones, missile guidance systems and robots who can work alongside humans on dangerous missions. In terms of fully automated weapons, some academics think that within just a few years we’ll have artificial intelligence (AI) capable of carrying out attacks without human input. The danger with these kinds of applications is that once they’re put into use nobody will know why an attack was carried out or even where it came from a country could start a war by disguising them as another nation’s technology. It’s not just about warfare either advances in computing have also been used to track people’s physical locations without their knowledge, while some governments use email filters to censor certain content or hunt down whistleblowers.

Computers have a significant impact on our lives. Our habits have changed due to the widespread usage of computers and internet connections. Making money online, using internet banking and social networking sites, operating an online business, enrolling in online classes, etc., are new habits. Because many individuals support technology without data analysis, it’s an excellent human practice.

What is the basic purpose of computing technology?

The world is growing day by day in every field. This modernism is generated only the computing technology.

What is the basic disadvantage of computing technology?

The basic disadvantage of computing technology is it destroys our lives and health also.