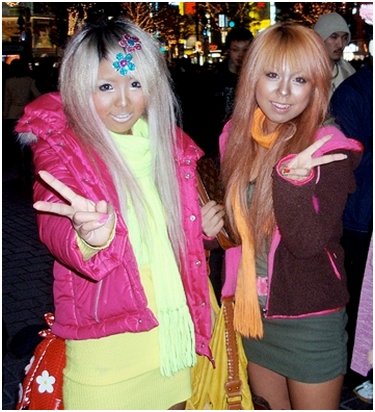 As a basic introduction, “gal” is one of many styles of clothing found in Japan. This style has evolved into many forms and shapes for several decades. There are still many subsets of this type today. Ganguro is a very visually striking form of gal, although it once was more popular than it is.

Ganguro is a fashion trend among young Japanese women that started in the mid-1990s, distinguished by a dark tan and contrasting make-up liberally applied by fashionistas. As with most social trends, there are variations among regions: Kyushu gangs favor pastel colors, North girls go for darker tans and electric blue eye shadow.

“Ganguro” (literally, “black face”) is a Japanese fashion trend in which young women wear dark makeup and intentionally make their skin unnaturally dark to resemble the appearance of tanned people. The ganguro subculture was originally linked to yamanba or “mountain hag” who represented something same like female vanity. The name itself likely derives from the way it makes many women look like they’re wearing blackface, which is very controversial.

Dressing and make up

Recently, this trend has become somewhat less popular, but many young women still wear it. Ganguro is said to have been started by a TV show called Takiiyasan no Onna Senshi (actually, three women warriors), which aired on TV Tokyo from noon till 1 pm every weekday. The show followed the adventures of the three “ganguro” heroines who were always dressed in very skimpy bikinis while fighting evil. It was extremely popular among schoolgirls during its first run.

People who dress in “ganguro fashion” usually have a dark tan and may wear brightly colored outfits and lots of jewelry, bracelets, beads, rings and earrings. In addition to the usual makeup (foundation, eyeliner, mascara etc.), ganguro women will often apply white powder to their faces or pink blush on their cheeks to accentuate them sometimes both. They generally tease their hair so that it stands out from the head in a cloud.

In the 1990s, as tanned skin became increasingly viewed as fashionable or beautiful among the Japanese youth, people started to mimic this appearance by trying to look as though they went on tropical vacations often. This led to an increasing popularity of sun-tanned skin and eventually leads to many girls going out in public with very dark face tanning. The ganguro fashion trend eventually died out because it became associated with low class delinquents who happen to be light on education and work ethic. Today, there are still women who go “ganguro” but it is not quite as popular as before.

In modern times, the term “Ganguro” is often misused to describe girls who darken their skin beyond a tanning bed or use fake tanning products that can be purchased over-the-counter. In Japan these girls are known as “bihaku” which means “beautiful skin”. There are very different concepts between ganguro and bihaku; whereas ganguro artificially tans her face to make it darker than it naturally appears, bihaku maintains her natural skin tone but applies white makeup on her face, neck, chest and arms to create an aura of fair skin.

The term “ganguro woman” is rarely used in Japan these days, and it has been replaced with the umbrella terms for this type of fashion debutante or dekame which mean “fatty face”. These terms are derogatory and refer to a whole ganguro look. Therefore they can be used regardless of a person’s actual weight.

The ganguro style has a lot to do with skincare and makeup techniques in order to make yourself look darker or lighter than you really are, but the main factor in getting this look is having well-tanned skin which can be difficult for people living in northern regions of Japan where there isn’t much sun. In addition, the fashion may have been inspired by women who frequent tanning beds or go on vacation to warm tropical climates often because they feel depressed when they don’t get enough UV exposure year-round from sunlight. However, these days it’s not necessary to spend money on sun-tanning beds because there are many self-tanners on the market that are much cheaper.

Being ganguro is also associated with being a delinquent or “an easy girl”. They often wear miniskirts, platform boots, bleached hair and lots of jewelry which can sometimes function as weapons in fights against other girls. The fashion  style has become less popular over the past few years but it still has not completely died out. There are some women who want to be “ganguro” even today despite the fact that they are no longer trendy or seen as part of mainstream kawaii culture..

The ganguro girls are often associated with working as prostitutes because it is difficult for them to find jobs and they feel like the only way to make money is through work, but there are also many “ganguro” women who do not engage in prostitution and simply dye their hair brighter colors, wear outrageous clothing and makeup, and adopt a party-girl lifestyle. There is still debate today about whether or not this lifestyle choice should be considered an empowering form of self-expression or if it is something more harmful like cultural appropriation or blackface performance art.

What do you think of when you hear the word “Ganguro”?

Many media sources have claimed that ganguro is a thing of the past, a trend from the early 2000s that was popular before fading away. But even though these articles are right about the fad disappearing for mainstream fashion, they are all wrong to say it has disappeared entirely.

The truth is that even today there are still girls who voluntarily choose to be ganguro. It seems like this subculture might eventually fade out one day, but as long as there are young people interested in it, it will continue to exist in some form.

The remaining ganguro girls are often mistaken for Yamanba or Manba by Japanese people who don’t know about them, because they all share similar physical characteristics. The main difference between these groups is that while ganguro apply foundation to their faces, Yamanba and Manba tend to have exaggerated facial features, drawing on beauty spots close to the eyes and having their upper eyelids colored white. Due to this similarity between the groups, most sources claim there are only around 100 active ganguro girls today.

They showed up wearing blonde wigs and facial foundations four to five shades darker than their natural skin tone. They wore false eyelashes that extended out to the sides far beyond their actual eye corners, and bright pink lipsticks. They often post pictures of themselves up on their group chat, although they don’t do it every day. These girls want to look different from how Japanese people expect Japanese girls to dress, so they choose to dye their hair blonde and use foundation that is much darker than their actual skin tone.

In conclusion, the term “ganguro” was coined in Japan in the 1990s and is still often used today as an umbrella term to describe women who dye their hair bright colors, wear lots of fake tanning products and adopt a wild lifestyle that some people perceive as desperate or dangerous. The origins behind this fashion movement may be unclear but one thing is certain: it has always been criticized for reinforcing harmful beauty standards and racist stereotypes about non-Japanese people (i.e. Westerners), which will hopefully inspire new generations to adopt new forms of self-expression.

Is the ganguro fashion is still followed?

Does every woman adopt this fashion?

No, absolutely no. not every woman adopt this fashion. And this fashion is common in teenagers.

Hoodies – The Biggest Comfort is Now The Cheapest

Generally cotton or synthetic materials are used to make hoodies

How the Hoodie Became a Symbol of American Culture