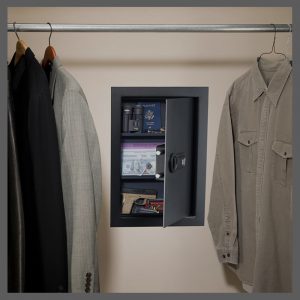 Whether your house seems safe or not, it’s never a bad idea to have some concealed safe ideas to play around with, because even if you have a state-of-the-art wall safe, it’ll be obvious.If a thief knows there’s a safe for valuables in your house, they’ll demand you unlock it in the case of a break-in.They’ll expect you to keep your valuables there. It’s a good idea to have safes in plain sight while simultaneously keeping concealed safes in plain sight to function as a decoy for your main safe.

Ideas for a hidden safe for all your valuables

1.     False Containers in Your Kitchen Cabinets (of the right dimensions with a real label)

This one has the potential to be beneficial, but you must proceed with caution. A variety of inexpensive stash cans that mimic a tin of beans, spaghetti, or a can of juice are available. They might stand out like a sore thumb depending on the quality. If you’re going to use a stash can, make sure you acquire one with the proper dimensions so you can apply a branded label. As reproductions, fake stash cans are simple to recognise. Burglars keep track of where individuals store their belongings and know to look in your kitchen cupboards for them. That’s why replacing the labelling with a real one is an excellent idea.

Leftover paint cans in the basement could just be the trick you need for your valuables that you want to retain in the house but don’t require access to very often. Naturally, clean the interior of the container, but leave the drips on the outside. Paint cans will not be opened by thieves because 1) they are always difficult to open, even with a screwdriver, and 2) it is always a mess.

If you have a modest jewellery box or an expensive watch collection, a paint can (assuming it’s placed among other paint and varnish cans and not on a bookshelf where it’ll stand out) can be a handy concealed safe spot to keep your valuables out of sight and out of reach of anybody looking for assets.

Air vents are seen in modern dwellings of conventional construction. They’re a well-known feature that does exactly what it says on the tin: they allow fresh air into your home. Burglars aren’t going to waste their time looking to see if your vents are open.

It won’t be visible if you don’t put a false air vent next to a genuine one. These can be mounted at floor level or at the top of the wall. Naturally, higher is preferable because thieves do not carry ladders with them. They’re looking to get in and out as quickly as possible. Fake air vents that appear just like the genuine thing may be purchased and installed in your walls. Make it seem old by covering it in thick paint that matches the rest of your vents if you want to add additional realism.

Read More: A Comprehensive Guide About How To Soundproof A Window?

There’s plenty of wall space in every room to add more power outlets. Fake sockets that look like the genuine thing may be purchased for a low price and readily installed into drywall walls. Burglars aren’t going to inspect your outlets or even the substance of your walls to see what’s behind it. If you’re going to use these, make sure they match the rest of your power outlets. If the remainder of your sockets and light switches have gold covers over the originals or have been changed, you won’t want a white one.

Electrical plugs, like air vents, offer the same advantage when it comes to concealed safes. They’re right there in plain sight, yet no one notices them because they’re just a part of the house. The electrical wall safes appear to be unsafe to tamper with, therefore they serve as a red herring.

Make certain it isn’t your underwear drawer. Anyone who has been burgled will tell you that apart from their personal space being violated, the most personally intrusive element is having their personal stuff rummaged through. Burglars are aware that individuals store items in their underwear drawers and will fling everything on the floor to check if anything is hidden.

In drawers where a thief is likely to look, a concealed compartment is more likely to be discovered. Consider installing a faux compartment in your kitchen’s rubbish drawer, coffee table, or side table instead.

Yes, just inside your own door. This has to be one of the most ingenious cash stashes you’ve ever seen. Burglars know to look in your drawers, under the mattress, and if you have a safe, they won’t hesitate to yank the bolts out from beneath it and take the entire thing with them so they can try to get into it when they have more time. If you store cash at home, make sure it’s out of sight. And fake beans tins in kitchen cupboards are too well-known to be effective anymore.

But not the door stash, since what thief would run their hands over the top of a door on the off-chance that there’s stuff there? Another great feature of this cache is how inexpensive it is to set up. All you’ll need is a good drill and a few drill bits, as well as an appropriate container. All you need is a single cigar tube holder. You’ll almost certainly find a cheaper one if you shop around. Test tubes are even less expensive. Simply ensure that the height is sufficient to accommodate rolled-up notes without the need to fold them. Cigar holders are thick enough to handle a stack of rolled-up bills.

How are you going to conceal my safe in your closet?

A closed cabinet door is one approach to conceal both tiny and big safes. If possible, make the door appear to be something else. (This is similar to how a wall safe is always disguised behind an oil painting in movies.) To conceal the safe, you may opt with a huge oil painting.

In your home, where do criminals seek for money?

A burglar could search your entire closet, pockets and all, seeking cash or other valuables.

How To Find The Perfect Signature Furniture For Your Home

What Are The Important Characteristics Of Rockwool?

How to Choose the Right Office Chair Wheels