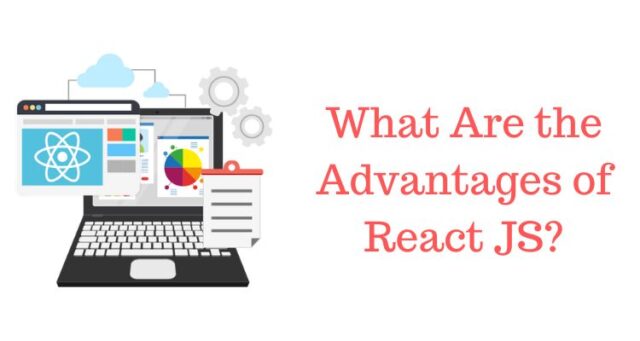 With so many new tools available in the market with various libraries and frameworks, it becomes a bit challenging for business owners to select the right one.

For business owners who want to do online business, their default choice would be Angular. But we have observed that another front-end development framework is becoming popular day by day. It is called React JS, which has shattered records in the field of web development.

React JS is considered the most famous front-end JavaScript library for creating Web applications. React JS is fast, simple, and highly beneficial for developing complex web applications and is managed by Meta and the community of skilled developers.

In this web blog, we are going to explain the various advantages of React JS, which makes it so popular among developers and many prominent organizations.

What is React JS?

React JS is an open-source front-end JavaScript library for developing fast and scalable UI interfaces based on UI components. It is built by Meta ( formerly known as Facebook).

After its release, it takes front-end development to the next level. Many big firms like Apple, Google, and Paypal are already using React JS in their production. According to the experts, React is the most popular front-end framework.

As you see, many organizations use React JS globally, which means it has some outstanding qualities. Of course, it offers some fantastic benefits that force companies to use this framework.

So, What are the main advantages of React JS that uplift so many businesses to use it?

When two parts or elements are combined to form one single component is known as composition. Earlier in web development, a website generally had a single page of HTML. So most of the time, those pages have very long lines of Html codes. But with the help of React JS, these codes are easily broken and put in tailored components. Then these components can be integrated into one place. Therefore, the code becomes more flexible and can be easily maintained. JSX is used to determine the type of React element. It is an extension to JavaScript that allows HTML quotation elements and uses these HTML tag syntax to supply subcomponents.

Document Object Model (DOM) is declarative in React. In React, UIs can be made by changing the component’s state, meaning you don’t have to interact with DOM directly. Therefore, designing and debugging the UI is very easy, and you can change the program’s state and see how the UI will appear at that time. This makes your code more foreseeable and easier to remove bugs.

React can be used without re-writing the existing code. It can also supply on the server using Node and power mobile apps using React Native. So we can create IOS, Android, and Web applications simultaneously. Lastly, extensive code reusability is supported by React.

The component-based development, automatic supply, and use of just ordinary JavaScript make React very easy to learn, build a web and mobile application, and support. The Javascript and Html can be combined to form JSX, making it easier to clench and work with.

One can even hire ReactJS developers that will help save the time and effort and offers more effective productivity.

It is one of the major advantages of React JS. SEO makes it easier for developers to find the appropriate content for the users. When the person searches anything on a search engine platform like Google or Yahoo, it tries to find the most suitable page for that particular search.

Fast, Efficient And Easy to Learn

It has in built functions that can be used to create fast, attractive, and scalable applications in less time. Furthermore, React only requires the basics of Html and CSS to give a start.

Using React is reasonably easy to achieve if you know some basics of JavaScript. As a matter of fact, a developer who is an expert in JavaScript can easily excel in the React framework in a few days.

This is one of the major advantages of React JS. The components can be reused potentially. The developers don’t have to write different codes for the same feature, so it saves a lot of time. Moreover, if any changes are done in a specific part, it does not affect the other parts of the app.

Eventually, we have come to the end of this article. Now you become familiar with the significant advantages of React JS and why it is prevalent among organizations.

The React JS gives the opportunity to build large and complex applications with data that changes again and again. It allows developers to work with the DOM that is much quicker and more user-friendly. It also provides the easier creation of an interactive User Interface, JSX support, and component-based structure. All this makes a good choice for both small businesses and enterprises.