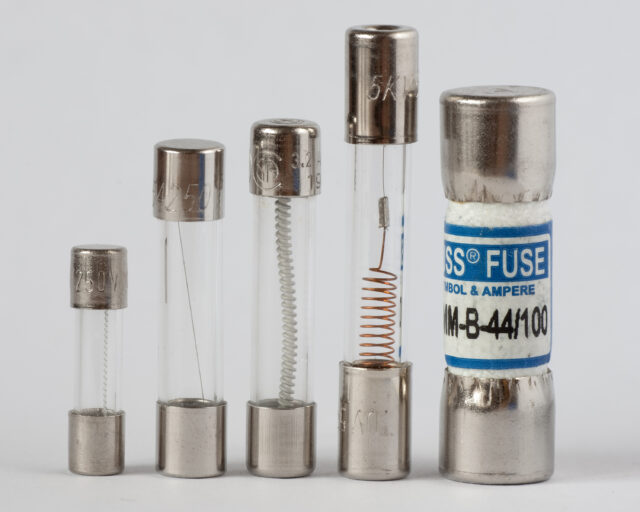 An overcurrent protection device, or OCPD, must be installed on all electrical circuits, including those in your house. The amount of amperage running through a wire or circuit is called current, and each wire or circuit has a maximum current rating.

The OCPD switches off the power to the circuit when this current is exceeded, preventing fires and other significant risks. NOWADAYS, the OCPD utilized on all circuits in most homes is a circuit breaker. The OCPD is most likely a fuse in older homes with outdated electrical systems. Screw-in fuses are used in standard lighting and outlet circuits. Cartridge fuses safeguard high-voltage circuits, such as those for electric stoves and dryers.

What Are Cartridge Fuses and How Do They Work?

In an electrical circuit, all fuses, even cartridge fuses, are the “weak link.” A metal strip is attached to both metal ends of the fuse body within the fuse. The metal strip, or link, heats up and quickly melts if there is a short or defect elsewhere in the circuit or if the circuit is overloaded, opening the circuit and shutting off the electricity. It’s similar to a light switch that only turns off once before needing to be replaced.

Cartridge fuses contain contact terminals on both ends and are cylindrical. They’re designed for circuits with a current of 30 amps or more and 240 volts. Cartridge fuses are divided into two categories.

Cartridge Fuses: Where Can You Find Them?

Many older electrical systems include two or more fuse blocks, each holding two cartridge fuses (as opposed to current breaker boxes). The main fuse is one of the fuse blocks. This is the OCPD for the whole fuse box and all of the house’s branch circuits. Large electric appliances, such as dryers, stoves, air conditioners, baseboard heaters, and electric water heaters, are housed in the other blocks.

Carefully pull on the wire bail or handle of the fuse block to access the fuses within. Pull out the block with one hand to limit the risk of electrocution if something goes wrong. Remove the block from the box altogether. To safely remove a fuse from its block, use a fuse puller, a plastic pliers-like tool, or other non-conductive material. Replace the fuses in the same manner as the originals.

Read More: An Overview OF Single Phase vs. Three Phase And What is the difference between single phase and three phase?

What is a Fuse?

A fuse is an electrical, electronic, or mechanical device that protects circuits from overcurrent and overload and ensures circuit protection. Thomas Alva Edison devised the electric fuse in 1890. Fuse comes in various shapes and sizes, but they all serve the same purpose. The numerous varieties of fuses, their manufacture, working and operation, and their use in various electronics and electrical systems will be discussed in this article.

A Fuse’s Construction and Operation

A general fuse is made out of a metallic wire with a low resistance surrounded by a non-combustible substance. It is used to connect and install in series with a circuit and device that must be protected from short circuits and overcurrent. If the fuse and circuit breaker are not present, the electrical appliance may be damaged because it cannot handle the excessive current according to their rating limits.

A fuse’s functioning concept is based on the “Heating Effect of Current,” which states that if a short circuit, overcurrent, or mismatched load connection occurs, the fuse’s thin wire melts due to the heat created the strong current passing through it. As a result, the power supply to the linked system is disconnected. Fuse wire is only a defective resistance component in regular circuit operation, and it does not affect the system’s normal functioning linked to the power source.

The amount of electricity running through the fuse’s wire determines how quickly it blows. The faster the response time, the greater the current flowing through the wire. The response characteristic represents the response time for an overcurrent incident. Ultra-fast fuses, also known as Fast fuses, are fuses that respond quickly to an overcurrent condition. They’re employed in many semiconductor devices since they’re easily harmed by too much current.

Another type of fuse is a slow burn fuse; switch fuses do not respond quickly to an overcurrent situation but instead blow after several seconds. Because motors use a lot of power, these fuses are used in motor control electronics systems.

As previously stated, AC and DC fuses have slightly different packaging types, and various applications need the use of different packages in the circuit. Marking, temperature derating, voltage drop, and speed are some of the additional elements and characteristics.

When a problem arises in the system, the Resettable fuse, on the other hand, automatically resets after the operation. Current limiting fuses create high resistance for a short time, whereas non-current limiting fuses produce an arc in the event of excessive current flow, interrupting and restricting the current in the circuit.

What are the different kinds of fuses?

What exactly are DC fuses?

Fuse for the DC system. When an excessive amount of current flows through it, the DC fuse opens or closes the circuit. The DC fuse’s sole drawback is that the arc created by direct current is complicated to extinguish since the circuit contains no zero current flows.